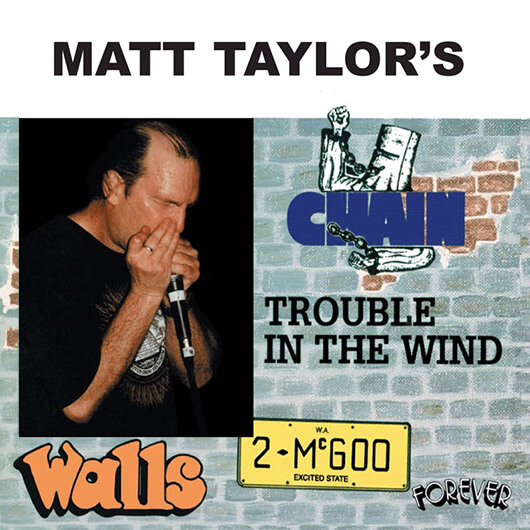 While there is little to be gained in resurrecting the old debate about whether white boys can sing the blues, it does not need to be said that there has always been something decidedly presumptuous about white rockers coming on like aged Delta dwellers. History has shown us that their flirtations are brief and for every Eric Clapton who admirably kept the faith, there have been a thousand others who have moved on when the boom burst.

Blues credentials, for both black and white practitioners, are all about tenacity, devotion and longevity. Of course, for most black performers there is little choice; the blues is a part of their being, as intrinsic as language. Fickleness is for honkies, who can go back over to the other side of the tracks when the novelty wears off. To his eternal credit, Matt Taylor has never crossed back over the tracks. His personal blues odyssey has been committed, as enveloping and as productive as that of any black American artist his age. His colour has long since ceased to be an issue. He makes blues music because he feels it, because it grows inside him and demands release.

There are no elements of fashion or fad or fleeting fancy and there never has been. Not when he took his first tentative blues steps in Brisbane with Bay City Union in 1966, nor when he took Chain to number one with the assaulting Black and Blue in 1971, nor when he cut three highly personalised solo albums for Mushroom in 1973-75, nor when he came surging out of Perth in Western Flyer in 1977, nor when he cooked up molten ‘Oz Blues’ with Phil Manning in 1981, nor when he made sturdy new Chain albums for EMI in 1985 and BMG in 1987.

For more than a quarter of a century, Matt has blazed away on a trusty mouth harp and snarled, spat and roughly crooned words of affection and anguish. An inspiration to at least three generations of young blues aficionados (many of whom have considered it an integral part of their learning process to play with him), Matt has single-handedly kept a blues flame burning in this country. Not, it should be stressed, as a copyist or a dutiful renderer but rather as a respectful and innovative interpreter who has. Over time, distilled the essence of all that he has heard into an original, fabulously distinctive Australian blues idiom.

For that is the pure, exhilarating joy of this exceptional album. Here, in these grooves, Matt Taylor has given rise to an articulate blues style that belongs to none but he—humorous, knowing, engaging, mature. When Matt, in the company of one of the many versions of Chain, supported Albert Collins on an Australian tour, the great black guitarist, who was not burdened by any awareness of Matt’s vast professional past, told him: “I hear what you’re playing and I know it’s the blues. But it sure don’t sound like any blues I’ve ever heard before.”

Neither does this album, which stands as a milestone in Australian blues recording and which came about as a result of the burning enthusiasm and support of blues-tour presenter Peter Noble. He heard Matt’s current band play late in 1991 and felt moved to capture what he heard with all its attendant passion, clarity and force. “The essence of the blues, to me,” Peter explains, “is not ‘my baby done left me” or ‘I woke up this morning and found myself depressed’ but an enduring body of work that I like to call ‘the working man’s poetry’.

“To be one of the greats of the blues you have, apart from musical ability, to be a great story teller. You have to be able to convincingly convey emotions of love lost and love found. To reach an even higher level, you have to be able to tell a tale in which you can laugh at yourself (by that I mean to have true humility).” “Matt Taylor does all of that and now has recorded an album that is truly Australian in content and which addresses issues way outside the usual parameters drawn by lesser musical talents.”

Over the past two decades, Australian contemporary music has given us many songwriters of true international standard; song-smiths who can write about what and who they see around them. But precious few have been able to write about themselves with the probing honesty of Matt Taylor. It was something I first heard in that startling and oddly compelling 1973 almost hit “I Remember When I Was Young”, and it is something I hear in a number of songs on Trouble In The Wind (Walls 2 McGoo). That is what I’ve always loved about the blues, what I’ve always expected from it—reality that grips and sometimes cuts.

This album might finally put to rest that old agony I mentioned earlier. Yes, white boys can sing the blues. Well, one of them can anyway.